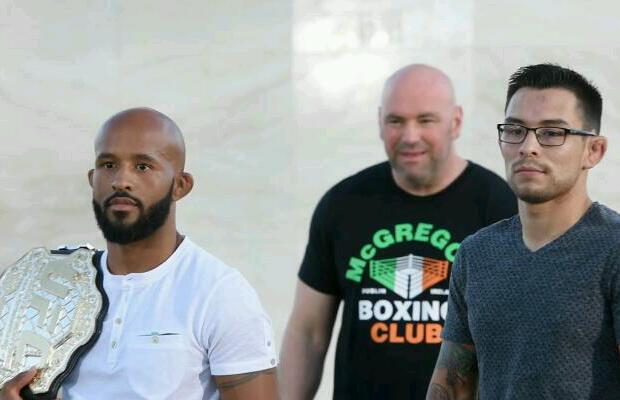 The flyweight championship bout between Demetrious Johnson and Ray Borg has been canceled. Reports surfaced late last night that Borg had been declared medically unfit to compete due to an illness by UFC doctors. MMA Fighting was the first to report the cancellation of the championship bout.

According to the report, Borg had been dealing with an unspecified illness all week as was progressively getting worse as each day went by.  Borg has had weight cutting issues in the past and many were quick to point that as the source of the illness. Borg’s nutritionis Dr. Michelle Ingels of Perfecting Athletes was quick to defend her client and told MMA Fighting that the illness “wasn’t weight related” and that “Ray has been getting progressively more sick each day this week and still wanted to fight so badly that he put on a game face and went to all of his fight week obligations.”

Since the news of the bout cancellation has spread the UFC released an official statement on the matter:

“Due to a viral illness to UFC flyweight contender Ray Borg, the main event bout against champion Demetrious Johnson at UFC 215 has been cancelled. Borg was deemed unfit to compete by the UFC medical team.

UFC 215, which is now headlined by the women’s bantamweight championship between Amanda Nunes and Valentina Shevchenko, will proceed as scheduled with 11 bouts at Rogers Place in Edmonton, Canada. Moving to the Pay-Per-View main card will be the flyweight bout between Henry Cejudo and Wilson Reis. Additionally, the Mitch Clarke and Alex White lightweight contest will now kick off the FS1 prelims.

With the removal of Johnson vs. Borg, customers may request a full refund of purchased tickets at point of sale.”