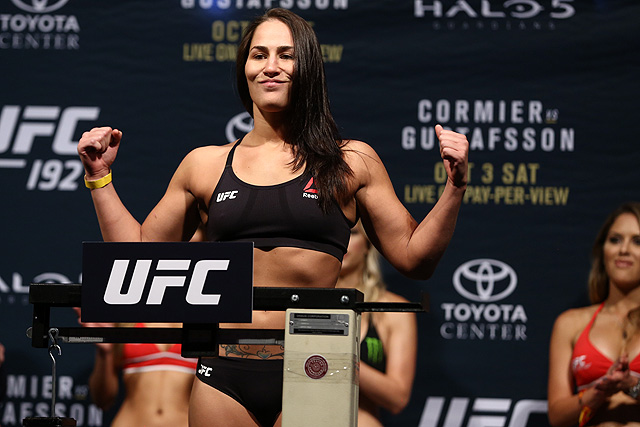 Cleveland native Jessica Eye will have the opportunity to fight in front of her hometown fans at UFC 203. She will face former title challenge Bethe Correia on the same night where another Cleveland native, heavyweight champion Stipe Miocic, will defend his title against Alistair Overreem. Eye took to her social media accounts to make the official announcement for the fight.

Me vs @bethecorreia here in Cleveland !!! Best place to get back on track .. #eyebelieve in #Believeland

Eye (11-5) remains one of the more popular fighters in the bantamweight division but her popularity has not translated into success inside the octagon. In six fight with the UFC she only has one win and has had a win over Sarah Kaufmann overturned after she failed a post fight drug test. She is currently on a three fight losing streak and most recently dropped a unanimous decision to Sara McMann back in May. Eye hopes a fight in front of her home crowd will be just the thing she needs to turn her fortunes around.

Correia (9-2) came on the radar of MMA fans after she suffered a 34-second knockout loss to Ronda Rousey back in August of 2015. After an 8 month absence she returned in April to face Raquel Pennington but lost the bout via a unanimous decision. After starting her career with nine consecutive wins, this is the first time Correia has gone through a losing streak and is in desperate need of a win to stay in the women’s bantamweight title picture.

UFC 203 will take place on September 10 at the Quicken Loans arena in Cleveland, Ohio and will air live on pay-per-view.