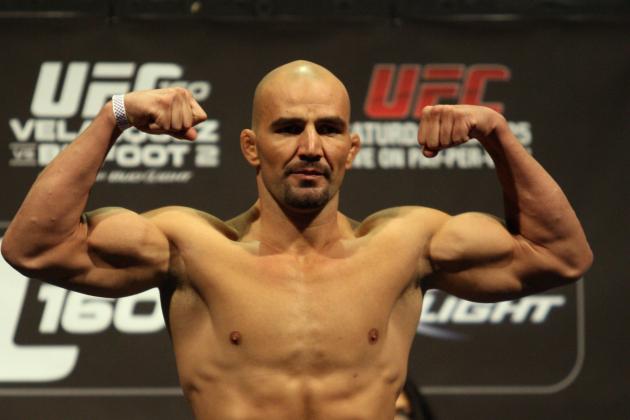 An undisclosed injury has forced former UFC light heavyweight champion Mauricio “Shogun” Rua out of his scheduled bout with Rashad Evans. Stepping in will be former title challenger Glover Teixeira. The changes were confirmed by the UFC on Wednesday. The bout will take place on the UFC on Fox card scheduled for April 16th.

After going on an impressive 20-fight win streak, with five of those wins coming in the UFC, Teixeira (24-4) received a shot at Jon Jones’ light heavyweight title. The outcome did not go the way Teixeira had planned. He would lose the title bout via a unanimous decision. After the disappointment of the title bout the Brazilian jumped right back into octagon to face Phil Davis. The outcome was the same as he suffered consecutive losses for the first time in his career.

Since the loss to Davis, Teixeira has scored two consecutive finishes: a submission over young prospect Ovince St. Preux and a knockout win over Patrick Cummins. A win over former title holder Rashad Evans may put Teixeira back in the title picture especially if Daniel Cormier is successful in his upcoming bout against Jon Jones.

Injuries and a few underwhelming performances  have hindered Rashed Evans ( 19-4)growth as a fighter the past few years. After dropping the light heavyweight title to Lyoto Machida in 2009, Evans climbed his way back to the top of the contender’s list in 2012 and challenged then champion Jon Jones. Evans would go on to lose the bout against Jones and would go 2-2 in his next four bouts. He last competed at UFC 192 where he dropped a unanimous decision to Ryan Bader.

UFC on Fox will take place on April 16 from Amalie Arena in Tampa, Florida and will be headlined by a lightweight grudge match between Tony Ferguson and Khabib Nurmagomedov.