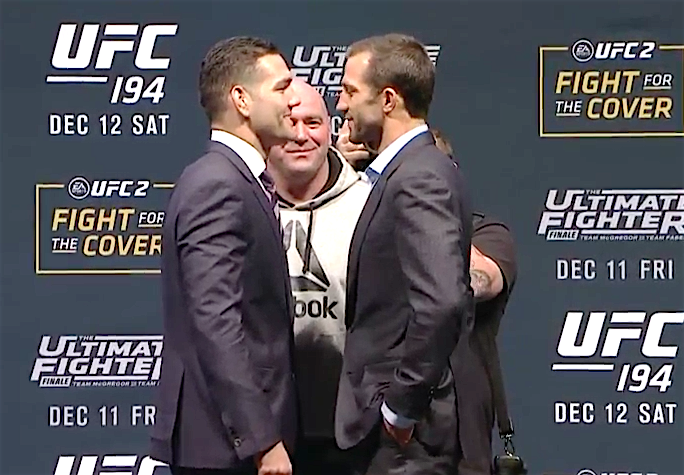 Two titles will be on the line when the UFC makes its return to Los Angeles. It was announced today that the Forum in L.A. will host UFC 199 on June 4, 2016. The event will have two titles on the line. Bantamweight champion Dominick Cruz will continue his longtime feud with Urijah Faber and a rematch for the middleweight championship between Luke Rockhold and Chris Weidman will serve as the night’s main event.

Rockhold (15-2) recently defeated Weidman (13-1) at UFC 194 to capture the middleweight title but due to a lack of a clear number one contender, Weidman was awarded the rematch. Their first bout left Weidman a bloody mess as Rockhold was able to use his grappling and size advantage to earn a fourth round TKO.

Weidman is known  for ending the Anderson Silva era by defeating the former middleweight king twice. He would then go on to defeat former light heavyweight champions Lyoto Machida and Vitor Belfort before suffering his first career loss to Rockhold.

After a rocky UFC debut in which he suffered a highlight reel knockout loss to Vitor Belfort, Rockhold bounced back very nicely in the with four consecutive finishes before earning a title shot.

The night’s co-main event will see one of the longest running feuds in MMA come to a head as Dominick Cruz and Urijah Faber will due battle for a third time. The score is 1-to-1 as Faber first defeated Cruz back in the WEC. Cruz returned the favor in 2011 when the two met at UFC 132.

Cruz (21-1) recently made his long awaited return after missing the better part of four years due to injuries. He defeated TJ Dillashaw this past January to recapture the bantamweight championship, a championship he was forced to relinquish because of his injuries.

Faber (33-8) has been one of the sport’s most popular fighters for a long time but he never has been able to transfer the success he had in the WEC to the UFC. He as put together a 9-4 record in the UFC but is 0-3 in title bouts. At 36 years of age this may be the last time Faber will get a shot at UFC gold.