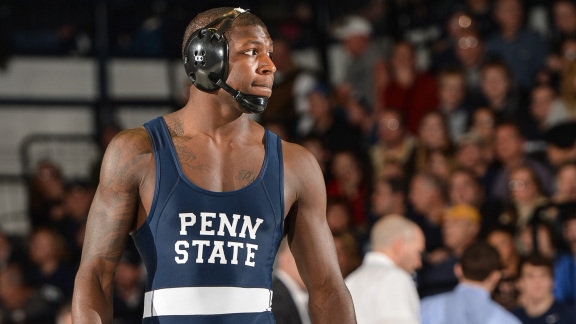 It seems that not a week goes by where Bellator MMA makes a major free agent signing. This week was no different as the MMA company announced that it has signed three-time collegiate champion and Olympic hopeful Ed Ruth to an exclusive multi-fight contract. But fans will have to wait patiently for the debut of Ruth as he has big plans before he steps into the cage.

The contract between Bellator and Ruth feels more like a retainer than anything else. Ruth is expected to make the 2016 U.S. Olympic Wrestling team and compete in the Rio games. Not until after his run in the Olympics is over when he will begin is mixed martial arts career. In statement released by Bellator Ruth made his intentions very clear, “I’ve known for a long time now that after I get Olympic gold around my neck, I was going to go get some MMA gold for my waist.”

Bellator has been on a free agent signing frenzy since Scott Coker took the realms as president. They have added a mix of MMA veterans, UFC defectors, and young prospects.

While he has zero MMA experience, Ruth has had the eyes of many in the MMA community on his collegiate career but it was Bellator that was able to seal the deal, “I’ve been talking with all the major organizations, and at the end of the day, I really believe in what Scott Coker is doing with Bellator” said Ruth. “They’re signing the top talent, they’re putting on exciting fights, and they’re letting me secure my own sponsors. It will be a little while until I step into the cage for the first time — but when I do, everyone they put in front of me is in for a world of hurt.”

Ruth is a three-time national wrestling champion out of Penn State. He is a local product from the Pennsylvania area. He attended Blair Academy High School in Susquehanna Township, PA before taking his talents to Penn State. Along with his three national championship he is also a four-time All-American. According to Bellator he plans to compete in the middleweight division.