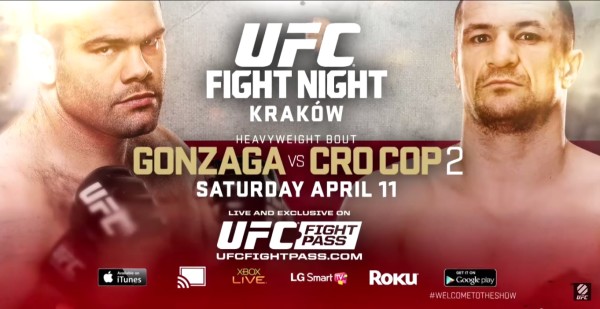 They say revenge is a dish best served cold. In the case of Mirko “Cro Cop” it was on ice for eight years. On Saturday Cro Cop got his revenge against Gabriel Gonzaga with a TKO win in the third round of their main event bout. It was the UFC’s first live event in Poland and the crowd received a bloody main event finish. After two slow rounds, Cro Cop landed a nasty elbow in the clinch that rocked Gonzaga to the ground. The Croatian fighter finished off the fight with more elbows on the ground that left Gonzaga a bloody mess.

Back in 2007, in just his second UFC bout, Cro Cop was brutally knocked out by Gonzaga that is still one of the most memorable and stunning victories in UFC history. The lost sent Cro Cop’s UFC career in a tailspin and he never lived up to the hype and lure he earned in his days in PRIDE. Wanting to get back the loss to Gonzaga was one of the reasons Cro Cop returned to the UFC. If he Mirko were to call it a career today it would be a great way to cap it off.

In the night’s co-main event Jimi Manuwa earned a unanimous decision victory over Jan Blachowicz in a rather uneventful bout. Besides Cro Cop’s victory the night’s other surprise was Maryna Moroz submitting former TUF contestant Joanne Calderwood. After the win, Moroz called out strawweight Joanna Jedrzejczyk who was in attendance.

The full results of the card can be seen below.

Mirko Filipovic def. Gabriel Gonzaga via TKO at 3: 20 of Round 3

Maryna Moroz def. Joanne Calderwood via submission at 1:30 Round 1

Leon Edwards def. Seth Baczynski via knockout 0:08 of Round 1

Alexandra Albu def. Izabel Badurek via submission at 3:34 of Round 2