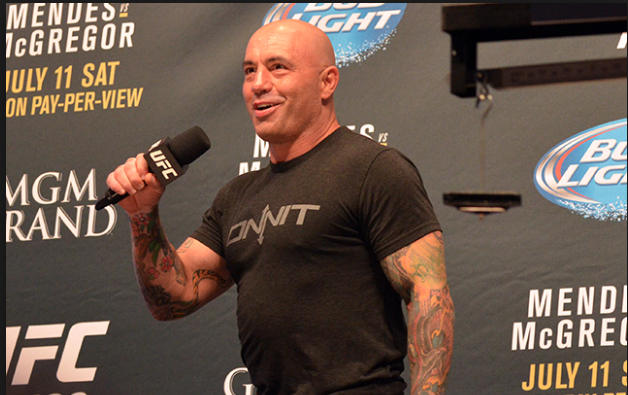 Longtime UFC announcer Joe Rogan has been very outspoken about his time working for the organization coming to an end. The recent sale of the UFC raised further questions as to if the popular announcer would remain with the company. Rogan answered the question about his future with the UFC during a recent episode of his podcast “The Joe Rogan Experience“. During the episode Rogan stated that he has signed a one-year deal to remain with the UFC.

“I signed for at least one more year. I was on the fence man, I just do too much s–t. I’m too f—ing busy. I don’t know if I’m doing myself or all the other things I do a disservice,”

Rogan has been with the UFC since 1997 but has had a wide range of other jobs including hosting television series and doing stand-up comedy. He admitted the heavy travel schedule UFC demands is what has led him to rethink his position as commentator.

“If I go to Brazil, that’s five days out of my life that I can’t do this and I can’t do all the other stuff that I do. And on top of that, there’s the recovery time. When I come back, I’m f—ing toast. That flying just f–ks my head.”

According to Rogan the new deal will cut out the international events the UFC holds. Currently Rogan only provides commentary for the pay-per-view and Fox broadcasted fights.

“What I decided to do was no more international travel. No more flying across the planet. I’m cutting down a lot of events, but I’m doing at-least one more year. It’s a year by year thing.”

Retired fighters Kenny Florian, Brian Stann, and Dan Hardy have all done commentary for various UFC Fight Night events both domestically and internationally. More than likely a combination of those three will fill the gaps left by Rogan.

Rogan has been with the sport of MMA since its infancy and his passion for it comes across in his commentary. He wanted to make sure that the fans know that is love for the sport has not diminished or died.

“I don’t want anybody to think that I don’t appreciate it or I don’t know how lucky I am or I don’t think it’s an amazing job. I definitely do. But I’m almost too lucky. I have too many amazing jobs.”