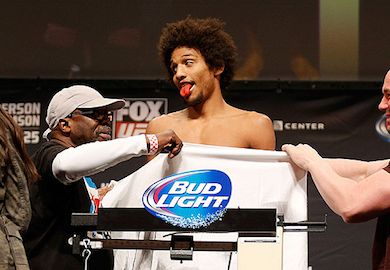 Cole Miller had originally been pegged as a replacement for Dennis Siver so that BJ Penn could remain on the UFC 199 card. When Penn had been removed for violating the USADA policy, Miler was now in search for a replacement so that he can remain on the card. The UFC wasted little time and found Alex Caceres to fill the void left by Penn. The new fight was confirmed on Wednesday by UFC officials.

Caceres (11-8), known to most fans as “Bruce Leeroy”,  has had a rough go of it lately having only one win in his last four bouts. He will be looking to gather momentum against Miller as he is coming off a win over Masio Fullen back in January.

Miller (21-9) last saw action back in December of 2105 when his bout against Jim Alers was ruled a “no-contest” because of accidental eye pokes.

UFC 199 will take place on June 4th from the Forum in Los Angeles, California. The event will be headlined by a middleweight championship bout between Luke Rockhold and Micheal Bisping.