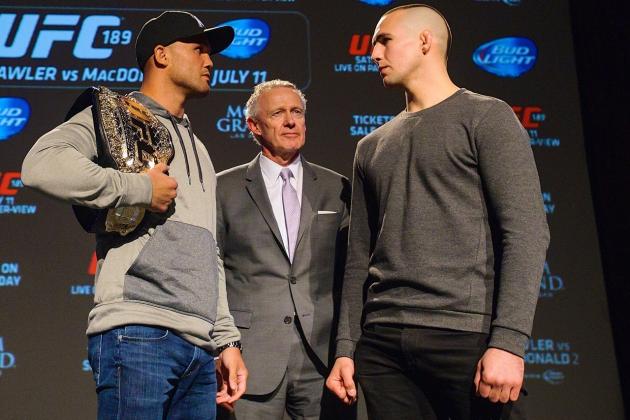 It was the bout nobody talked about leading up the UFC 189. Lost in the shadow of Conor McGregor was the welterweight championship bout between Robbie Lawler and Rory MacDonald. A day after McGregor came from behind to claim the interim featherweight championship and sent the crowd at the MGM Grand in a wild frenzy, it is the epic battle between Lawler and MacDonald that the people are still buzzing about.

In today’s age social media has a way of never letting things fade away. Photos of Lawler’s split lip and MacDonald’s shattered nose were all over the internet before UFC 189 had officially ended. Then a couple of hours after the event yet another photo emerged that represented what the sport of MMA is all about.

In the end you find admiration and respect for one another. Thank you @ruthless_rl and @romac_gorilla for the amazing fight! Thank u to all the fans for the support!! #blessed

What Lawler and MacDonald put themselves through was a representation of the true meaning of the sport of mixed martial arts. The warrior spirit that embodied those two during the fight was familiar to those who have followed the sport for many years and new to the casual fans that may have just been tuning in to see McGregor.

In the months leading up to UFC 189, the company sent McGregor and Aldo out on a world-wide tour to promote the bout. Lawler vs. MacDonald seemed like it was placed on the card as an afterthought. A way of the UFC justifying the pay-per-view prices. Two title fights on one card would be a reasonable justification to ask whatever price they wanted for UFC 189. It did not matter anyways, this was going to be the Conor McGregor show through and through. Only when Jose Aldo pulled out of the bout with less than two weeks to go did the UFC start to actively promote the Lawler and MacDonald bout.

Now that the dust has settled and everyone has caught their breath both Lawler and MacDonald are made men. Since returning to the UFC Lawler has shown a level of maturity that has carried him to UFC gold. He has engaged in many battles and has proven that he will not quit no matter what and in the post GSP era a champion that is willing to go all out is something the UFC needs.

MacDonald has long been talked about as the future of the welterweight division. The likely successor to GSP’s throne. His maturation has been a slow process and not without its setbacks. While a loss in a championship bout is something no fighter wants to feel, a performance like he had on Saturday is the stuff legends are made of.

Both Lawler and MacDonald will feel the pains from Saturday’s fight for a long time but that will fade and what will replace it is the glory and pride of being part of an instant classic.