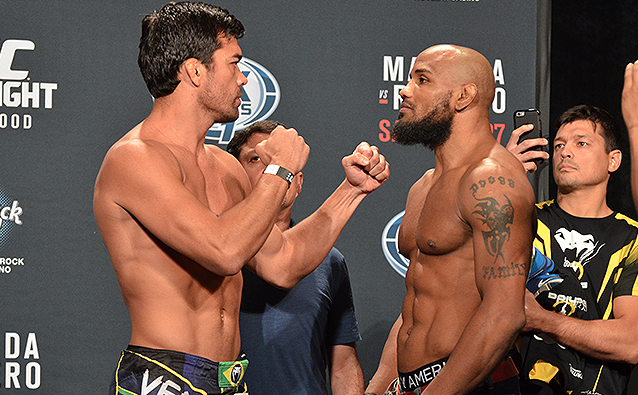 On Saturday night the UFC’s Fight Night card was headlined by a crucial middleweight bout between Lyoto Machida and Yoel Romero. Machida was desperately trying to erase the memory of the Luke Rockhold defeat back in April and Romero was trying to get back on the fast track to a middleweight title fight. Romero was successful with a third round TKO and showed little rust from the long layoff. What does the outcome mean for both fighters? Let us take a look in this rapid response.

For Yoel Romero the win was without a doubt the biggest win of his career. His reaction after the referee pulled him off Machida reflected the importance of the win. Romero nearly ran through the cage and into the crowd in sheer bliss. The former Olympic wrestler had been out of action since last September nursing a knee injury but if you did not know that you would have never guessed he had not fought in nearly 10 months. He showed great patience and confidence in his stand up skills before switching to his strong grappling in the third round and getting the TKO win after a series of vicious elbows landed on Machida’s face.

The native of Cuba, Romero has been a professional mixed martial artist for a little over five years and is now on the verge of a title shot. His Olympic wrestling pedigree gives Romero a huge advantage against any fighter he faces which is why he has been able to make such a huge impact in such a short amount of time.

Romero has twice been scheduled to face fellow middleweight contender Jacare Souza and that seems like the natural choice for his next opponent. The UFC has already confirmed that champion Chris Weidman will take on Luke Rockhold next and it is a strong possibility that the UFC could place the Souza and Romero bout on the same card.

Former light heavyweight champion Lyoto Machida has been searching for another opportunity to wear gold around his waist. He lost title bout against Jon Jones and then a middleweight championship bout to Chris Weidman. He climbed back up the ranks to only lose to Luke Rockhold in April. He wanted a quick turnaround to erase the bad taste of the Rockhold loss and that proved to be a mistake as he was once again dominated on the ground in route to another loss.

Machida has proven in the past that he can handle the bottom half of the middleweight division. He has easily beaten the likes of C.B. Dollaway and Mark Munoz but has struggled with the elite fighters in the division. That could be due to age, Machida is 37 years old and has been fighting professionally since 2003. Machida’s goal has never been to just collect a paycheck for fighting. He has always made it clear that it is championships or bust. The “Dragon” has always been able to get back into the title picture but with two devastating loses in a row, the championship boat may have just sailed past him.