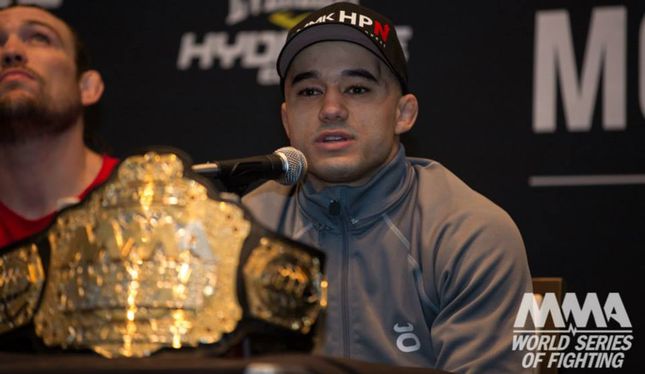 Marlon Moraes will defend his bantamweight championship at WSOF 22. The story was first reported by Sherdog. Moraes will go up against 24-year-old Sheymon da Silva Moraes. The bout will serve as the night’s co-main event and second title bout. The night will be headlined by a welterweight championship bout between Rousimar Palhares and Jake Shields.

Moraes (14-4) is currently riding a nine-fight win streak including going 7-0 since debuting for the WSOF in 2012 and is widely considered the best bantamweight in the world not on the UFC roster. He won his title in March of 2014 after dominating Josh Rettinghouse en route to a unanimous decision victory. This bout with Sheymon will technically be his second title defense. Moraes first title defense was originally supposed to be against Cody Bollinger but after Bollinger missed weight the bout was ruled a non-title fight. Moraes went on to defeat Bollinger via submission. He then went on to defend his title against Josh Hill back in February of this year coming away with a decision victory.

Sheymon (7-0) is a product of Team Nogueira but has recently moved to train with Blackhouse MMA in Los Angeles. Sheymon is only 24 years old but is already on the radar of many MMA fans. Of his seven career wins, four have come by way of knockout. He made his WSOF debut in December of last year earning a split decision victory over Gabriel Solorio.

WSOF 22 is set to take place on August 1 live from the Planet Hollywood Resort and Casino and is expected to air in the NBC Sports Network.