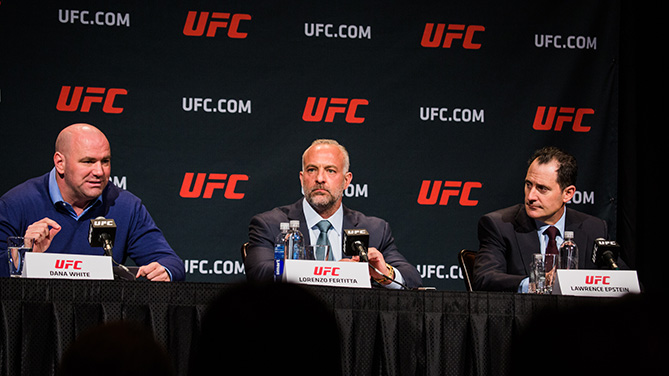 On Tuesday night UFC president Dana White went on Fox Sports Live to announce that the organization has suspended light heavyweight champion Jon Jones and had also stripped him of his title. Below is the full statement released by the UFC.

“UFC announced that it has suspended Jon Jones indefinitely and stripped him of the light heavyweight title as a result of violations of the organization’s Athlete Code of Conduct Policy. Jones was recently arrested in Albuquerque, N.M. on a felony charge of leaving the scene of an accident involving personal injury. As a result of the charge and other violations of the Athlete Code of Conduct Policy, the organization believes it is best to allow Jones time to focus on his pending legal matters.

UFC feels strongly that its athletes must uphold certain standards both in and out of the Octagon. While there is disappointment in the recent charges, the organization remains supportive of Jones as he works through the legal process.

With this decision, UFC has determined that No. 1 contender Anthony Johnson will now fight No. 3 contender Daniel Cormier for the UFC light heavyweight championship at UFC 187 on May 23 in Las Vegas.”