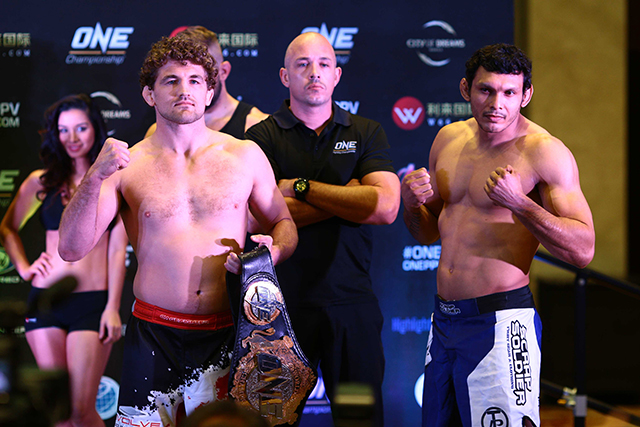 “Funky” Ben Askren returns to action on Friday April 24th at ONE Championship 26 and will defend his welterweight title against Luis Santos. On Thursday afternoon weigh-ins for the event were held and both Askren and Santos made the 170 pound weight limit making the bout official. The card is scheduled to take place in Manila in the Philippines and can be seen on internet pay-per-view.

Askren (14-0) is arguably the best American born fighter not currently fighting for an American promotion. ONE Championship is Asia’s largest mixed martial arts promotion thus making it one of the largest in the entire world. Askren is the former Bellator MMA welterweight champion and left the promotion in 2013 after contract talks fell through. Arskren debuted of ONE Championship in May of 2014 winning his debut via submission. He last competed in August where he won via a TKO.

Santos is a veteran of over 15 years had has remarkably fought over 70 times and has compiled a record of (61-9-1). He is currently riding a seven-fight win streak and of those seven wins, six have come by way of knockout.

Below are the full weigh-in results for ONE Championship 26: