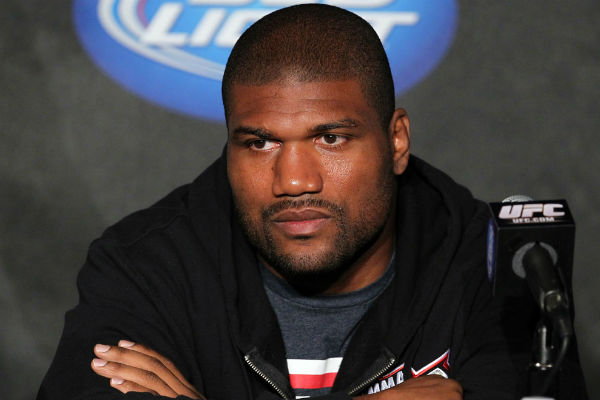 The battle for the services of one Quinton “Rampage” Jackson is heating up as Bellator MMA was granted an injunction from a New Jersey judge forcing the fighter out his UFC 186 bout against Fabio Maldonado.

Back in December of 2014 it was announced that Jackson had terminated his contract with Bellator and had signed a new deal with the UFC. Jackson stated that Bellator did not live up to their part of the contract by not properly promoting events he was scheduled to fight on, provide entertainment opportunities outside of the company, and failing to provide the Bellator 120 pay-per-view buy shares to him.

Of course Bellator countered by saying that Jackson breached the contract by signing with the UFC and filed an injunction that would prevent the fighter from appearing for another organizations. On Tuesday Bellator released a statement following the judge’s ruling, “We are pleased by the judge’s ruling and look forward to having “Rampage” fighting for Bellator again soon.”

It is clear to see the bigger picture here. Bellator is not really fighting to get Rampage back under its umbrella but rather are trying to make a point to the UFC. We all know that the UFC is the biggest mixed martial arts organization in the world and can chew up and spit out any other MMA company it wants to. It has done so in the past with Strikeforce, WEC, Pride, Elite XC, and so on. Anyone who follows MMA knows that Bellator is ages behind the UFC in terms of revenue, attendance, ratings, and roster quality but that does not mean Bellator will stand back and be shoved to the side.

On the surface this may seem like the little guy standing up to the big bad corporate monster but in fact Viacom, which is a media giant, owns Bellator MMA and if they choose so can pour millions upon millions into the company. Though technically the battle is between Bellator and Rampage this could be Bellator showing the UFC that its big brother has its back and that they will protect their assets from now on and not let fighters leave for the UFC.

UFC 186 is set to take place on April 25th in Montreal. The UFC issued its own statement regarding the matter, “The UFC organization was surprised about the ruling because Mr. Jackson represented to UFC on multiple occasions that he was free to negotiate and contract with UFC. The UFC organization is also surprised that Bellator sat on its alleged rights for months before taking action.”

The fight card for UFC 186 has already taken a beating as the originally scheduled main event for the bantamweight championship between TJ Dillashaw and Renan Barao had to be scrapped due to an injury and a previous bout between Rory MacDonald and Hector Lombard was forced off the card due to Lombard failing a drug test. If Rampage is forced off this card then it will leave the event almost completely lacking of star power for a pay-per-view.

The UFC also stated that it will explore options against the injunction and that Rampage may still appear on the card, “UFC understands that Mr. Jackson is considering an emergency appeal, and UFC is also considering action to protect its rights and minimize damages regarding this matter. UFC 186 in Montreal, Canada will proceed as planned and UFC is currently evaluating its fight card options.”

With the event only two weeks away we will have to wait and see how all this plays out, oh and if you were wondering if Rampage released a statement, he took to his Instagram account to vent his frustrations: