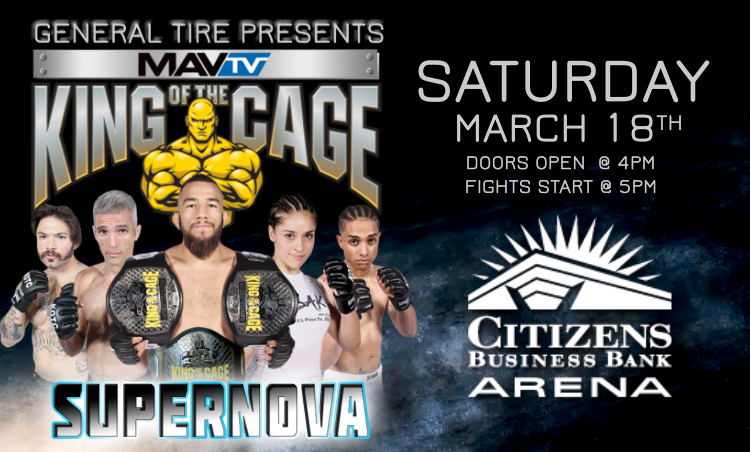 The Citizens Business Bank Arena in Ontario, California played host the King of the Cage’s Supernova event on Saturday March 17th. The event was headlined by triple champion and KOTC star Juan Archuleta. Archuleta put his KOTC lightweight championship on the line against Brandon Hastings. Results from the event can be read below.

King of the Cage Lightweight Championship: Juan Archuleta (c) def. Brandon Hasting via TKO in Round 1 at 0:24.

Archuleta comes out aggressive with a good mix of strikes. He pushes Hasting to the cage and lifts him up for the slam. Hasting comes crashing down to the mat and Archuleta lands a couple of strikes before referee Mike Beltran notices that Hastings arm is severely broken. Hasting’s arm got caught underneath him as he came down from Archuleta’s slam snapping his arm in half. The crowd erupts in excitement but when the replay is showed the crowd gasps collectively. After several moments Hastings is able to leave the cage under his own will and Archuelta’s celebration continues.

Juusola is clearly the bigger fighter in this lightweight bout and is using his size to counter the speed of Fillingame. After a few minor exchanges Fillingame pressures Juusola up against the cage but does little to score a tackdown. Juusola lands a knee below the belt of Fillingame and the fight is stopped. Fillingame bounces around for a few moments but then signals to the official that he is good to go. The referee reposition the fighters back on the cage but the two quickly break apart and meet at the center of the cage. Juusola seems content with waiting to counter the strikes of Juusola and the round ends with both men standing in the center of the cage.

The second round continues just like how it ended in the first. Both men do not appear sluggish but Juusola is clearly looking for his opening and will not trade shots with Fillingame . Juusola does a little taunting after a left hand lands by Fillingame. Fillingame starts to put on the pressure a little more but Juusola does a good job avoiding any real damage. Fillingame is clearly the aggressive fighter but cannot land anything significant. Juusola remains content with looking for his specific opening and will not force the action at all. The crowd begins to boo as the round comes to an end.

Holland comes out the aggressor and lands a front kick that sends Gomez to the cage. The two are tied up but quickly break apart. Holland lands another front kick but Gomez absorbs it better the second time around. Holland uses his length to dive in and out with his strikes. Gomez has a more traditional Muay Thai stance while Holland is very light on his feet. Holland lands another front kick that sends Gomez across the cage. Holland is smiling in the cage and look extremely comfortable against Gomez. Holland continues the pressure and lands a series of punches and kicks that has Gomez reeling against the cage. A left hook drops Gomez to the canvas and before Holland can inflect any more damage the referee stop the bout.

Arceo knocks down Ross with a straight front kick to the chest shortly after the opening bell. Ross quickly gets back to her feet and throws kicks and punches. Both women are light on their feet and have a lot of movement. Arceo fakes a few kicks before landing a straight right hand. Arceo is comfortable throwing kicks and lands another front kick that drops Ross. Ross does not back down and throws wild punches to try and escape Acreo’s pressure. Arceo continues to throw kicks from all angles and mixes in a array of punches. Ross seems outclassed in the striking game as Arceo showed a wide variety of weapons. The first round ends with both women exchanging a set of strikes.

Ross drops Arceo with a right hook but Arceo quickly recovers. Arceo goes back on the attack and pressure Ross to the cage. Arceo looks recovered from the right hook and continues her attack. Ross is though but cannot seem to figure out Arceo. A right hook followed by a spinning back kick to the midsection gets the crowd excited. Ross escapes but gets dropped by a hard straight punch. Arceo follows it up with short elbows against the cage and a right kick to the face drops Ross to the canvas forcing the referee to stop the fight.

Williams quickly goes in for the takedown and lands it. Skancke gets back to his feet and lands a few knees. Williams shoots again but Skancke sprawls nicely. Williams continues his pressure and goes again for the takedown. Skancke grabs ahold of Williams’ ankle and goes for a heel hook. Williams rolls out of it and the two get back to their feet. Skancke gets a hold of Williams and lands a few knees to the head. Williams manages to survive but lands a low blow and the fight is stopped. Skancke only needs a few moments and the action resumes. Williams is knocked down by a leg kick. Skancke gets on top of Williams and lands a few strikes before bing reversed. There is a ton of back and forth action with both men changing positions and control. Skancke finds himself in control of Williams’ head in a headlock but lands an illegal knee to the head. The referee stops the bout and a point is taken away form Skancke. The fight resumes and Williams pressures Skancke to the fence. The round ends with both men up agains the fence.

Skancke comes out aggressive to start the second round but Williams gets Skancke to the canvas and sinks in a school yard choke. Skancke escapes and gets in Williams’ guard. Both men get back to their feet. Williams takes the fight back to the ground and now the fight has turned into a grappling match with Williams looking for the constant takedown. Skancke pulls guard much to the surprise of the crowd and lands short punches to the side of Williams’ face. Williams does little to advance his position and Skancke gets back to his feet. Skancke lands a knee to the top of Williams’ that drops him. The round ends before Skancke can inflect any more damage.

Williams again goes in for the takedown but Skancke lands on top and starts to reign down punches and elbows. Williams gives up his back and manages to get back to his feet. He pressures Skancke back up the fence and puts the pressure back on Skancke by forcing him to carry his weight up against the fence. The referee breaks them up but Williams again pushes the fight back to the fence. Skancke attempts a kimora but Williams escapes and lands a few short elbows. The crowd erupts with excitement as the action sways back and forth for each man. Williams keeps the pressure on Skancke. The men sprawl and exchange control but Williams ends up on top. The round ends with Williams in side control landing knees to the side of Skancke.

Johnny Munoz Jr. def. Musa Tolliver via submission in Round 1 at 3:23.

After a few moments of feeling each other out Tolliver lands a punch that sends Munoz down. Tolliver goes in for some ground strikes but is wrapped up my Munoz. Munoz pushes Tolliver up against the fence and lands knees to Tolliver’s thighs. The two men reverse each other before Tolliver takes the fight to the ground and gets in Munoz’ guard. Tolliver tries spinning out of Munoz’ guard but leaves his arm open for grabs. Munoz grabs ahold of it and sinks in the armbar forcing Tolliver to tap.

The two men exchange kicks in the center of the cage. Flach takes control of the center of the cage with Smith circling. Flach goes for the takedown but ends up pushing Smith towards the cage. The two exchange knees and Smith lands one below the belt of Flach, it is the third low blow in the first four fights. After a few moments Flach is ready to fight. Flach goes for a head kick but it misses and Smith is able to grab ahold of him and push him to the cage. Flach reverses it and goes for a takedown. Smith lands a few knees to the midsection of Flach. Round one ends with the two men pressed up against the cage.

The second round starts with Smith pressing the action. He lands several hard shots to Flach. Flach tries to avoid the pressure from Smith but the shots continue to land from Smith. Flach becomes overwhelmed and drops to the canvas. Smith follows up with several elbows and the fight is stopped.

Daniel Hernandez def. Bobby Sanchez via submission in Round 1 at 1:40.

Hernandez takes control of the center of the cage. Sanchez goes for a takedown and lands it. Hernandez gets back to his feet but Sanchez pulls guard. The two men grapple on the gourd before Hernandez gains side control and lands a few hard elbows. Sanchez give up his back and after a few strikes Hernandez sinks in the rear naked choke and Sanchez is forced to tap.

Chris Fajardo def. Steve Ramirez via TKO in Round 1 at 4:51 .

Fajardo lands a leg kick and pushes Ramirez back. Fajardo goes for another leg kick but it is caught by Ramirez. The two men exchange strikes and the crowd quickly erupts by the action in the cage. Fajardo lands a low blow and the action is stopped. Ramirez regains himself and the two pick up right where they left off. The two men are confident in their stand up as they throw caution to the wind. Fajardo pushes Ramirez to the cage but Ramirez does not back down as he continues to throw strikes. Fajardo lands a right hand that drops Ramirez. Fajardo follows with some ground strikes but Ramirez quickly grabs his leg. Fajardo opts to break away and have Ramirez stand up. The action continues with both men refusing to back down. Fajardo is landing more shots than Ramirez and it starts to show on Ramirez’ face. Fajardo continues to land on Ramirez and drops him to the canvas. Ramirez tries for an armbar but fails. Fajardo then starts to land elbows and cuts Ramirez wide open. Referee Mike Beltran watches intensely to see Ramirez defending himself. Fajardo lands a few more hard elbows and right as the signal for the final 10 seconds of the round is sounded Beltran stops the bout.

Jonathan Noriega vs. Armando Murillo Ruled A No Contest .

Murillo starts off with a spinning kick that misses. Noriega grabs ahold of him and presses him towards the cage. Murillo lands short punches as Noriega throws knees the the thighs and foot stomps. Murillo reverses but Noriega escapes. Murillo gets ahold of Noriega and lands a huge suplex. Noriega gets back to his feet. Murillo pounces back onto Noriega but lands a knee to Noriega’s groin that stops the action. Noriega is on the canvas for a very long time. Officials enter the cage and it is determined that Noriega’s cup was broken by Murillo’s strike. The blow was so hard that Noriega actually vomits in a bucket provided by ringside officials. The bout is called off by referee Jason Herzog. Murillo quickly runs over to hung Noriega who has seemed to regain a little of his composure. The bout was officially ruled a no contest at 2:21 of round number 1.