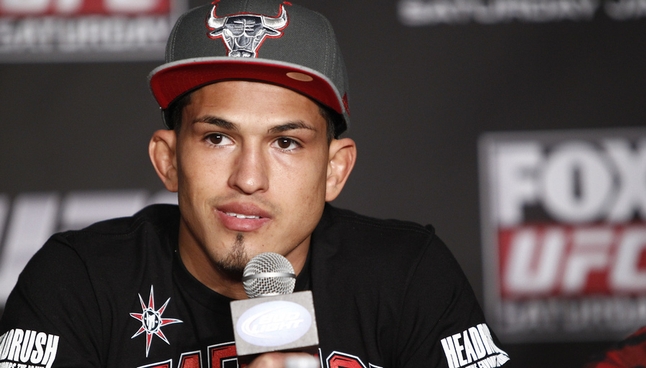 Anthony Pettis has lost three fights in a row. Prior to this current losing streak the former UFC lightweight champion had never lost consecutive bouts and after three less than stellar performances Pettis has decided that a change must be made. In a move that many fighters before him have done, Pettis will drop down weight classes and try his hand in a new division. “Showtime” will make his featherweight debut against Charles Oliveira at the UFC on Fox card to be held in Vancouver. The event is schedule to take place on August 27th.

After rolling off five consecutive wins from 2011 to 2014 that saw him capture and defend the UFC’s lightweight title, Pettis (18-5) has turned in three sub par performances. He was dominated by Rafael Dos Anjos for five rounds in a bout that saw him drop the lightweight title. He then lost a split decision to Eddie Alvarez in a fight that exploited Pettis’ grappling game. Hoping to the bad taste of the Alvarez bout out of his mouth, Pettis did a quick turn around and fought Edson Barbosa at UFC 197 unfortunately the results was much of the same and he lost the bout via a unanimous decision.

This will not be Pettis’ first filtration with the featherweight division. At the height of his lightweight title reign a super fight between he and then featherweight champion Jose Aldo had been set up but the injury bug made sure the bout never happened.

There is no question that Pettis is a world-class talent and deserves to fight the best the featherweight has to offer. The UFC has pitted Pettis against the young and talented Oliveira (21-5) who is 5-1 in his last five bouts.

Oliveira’s talent is there but when pitted up against top-level talent he comes up short having lost to Max Holloway, Frankie Edgar, Cub Swanson, Donald Cerrone, and Jim Miller. He will get another chance at a top level talent in Pettis in a bout that will prove many things right and wrong for both men.