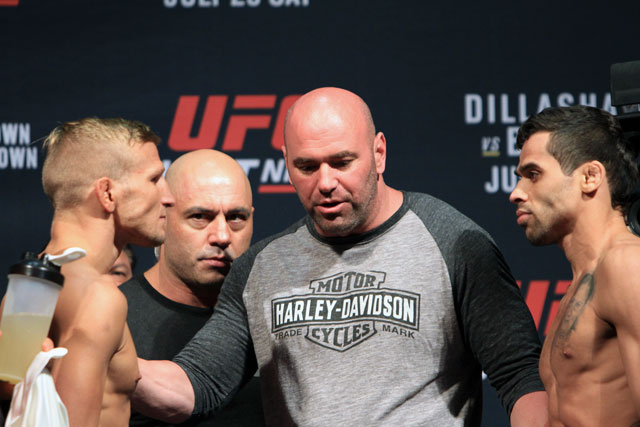 If you thought the rematch between TJ Dillashaw and Renan Barao wold be a closer fight than their first encounter, you were not alone. Barao was long considered one of the best pound for pound fighters on the planet before he lost to Dillashaw back in May of 2014. With a full training camp and no injury set backs, it would not be illogical to think that Barao would return to form the second time around. That was not the case on Saturday night.

TJ Dillashaw put on a masterful performance in his one-sided TKO victory over Barao. The bantamweight champion displayed foot work and level changes that made Barao look like he did not even belong in the same octagon with him. The only trouble Dillashaw had with Barao was when he would stand and trade with the Brazilian. In between rounds Dillashaw’s coach, Duane Ludwig, was quick to remind him to keep moving and stick to the game plan.

The game plan worked and by the end of the third round Dillashaw had Barao backed up against the fence and could have finished the bout there if not for the bell that signaled the end of the round. It was not long into the fourth round that Dillashaw had Barao on the ropes again. A left hook was the beginning of the end as Barao tried desperately to punch his way out of trouble but Dillashaw’s punches were precise. Though Barao never went down to the canvas, referee Herb Dean had seen enough and stopped the fight.

With the win Dillashaw put to rest any doubts about his reign as bantamweight champion. Now Dillashaw can focus on the rest of the division and more particularly former champion Dominick Cruz.

Below are the full results from the UFC on Fox card.