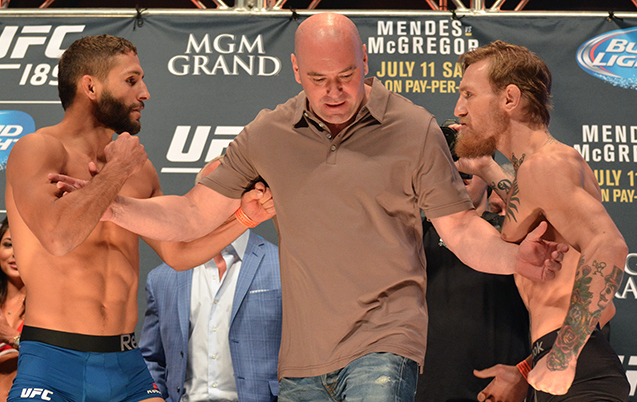 UFC 189 was slatted to be the biggest event of the year and even with the main event being changed with less than two weeks to go, the card turned out to be one of the most entertaining in recent memory. The night was capped off with two title fights that more than delivered its fair share of drama and excitement.

In the highly anticipated main event the “Notorious” Conor McGregor went from being on the wrong side of a wrestling clinic to delivering a stunning come from behind TKO over Chad Mendes to claim the UFC interim featherweight championship. For the better part of two rounds Mendes was able to prove what many had speculated, that McGregor would have trouble with the elite wrestlers in the division. The fight started off with much drama as McGregor was very confident as soon as the bell sounded. He smirked and jawed towards Mendes but things quickly changed as Mendes was able to land a takedown and control the fight on the ground.

The first round ended with Mendes landing solid elbows from the guard and the second round proved to be much of the same. Mendes controlled the fight for much of the second round with his wrestling and ground and pound. As the second round came to a close, McGregor was able to get back to his feet and immediately put pressure on Mendes. The Irishman was able to land a fury of punches that sent Mendes towards the canvas and the Alpha Male standout went into the turtle position. It only took referee Herb Dean a few seconds after to step in and stop the fight.

The welterweight championship bout between Robbie Lawler and Rory MacDonald will go down as an instant classic. Lawler and MacDonald battled back and forth for the better part of four and a half rounds. Both men showed the desire to win but it was Lawler’s killer instinct that was the deciding factor. Over the course of the fight Lawler was able to smash MacDonald’s nose in to a pile of mush while MacDonald was able to split Lawler’s lip in half.

The fight went back and forth and both men had each other on the ropes multiple times throughout the fight. The first two rounds were won by Lawler but the tide had turned when Lawler was able to survive a late onslaught by MacDonald in the third round. The fourth round was a back and forth affair with both men becoming bloody and beaten.

By the time the fifth round had started, MacDonald’s nose was a complete mess and all it took was one clean shot from Lawler to end the fight. Lawler had landed a clean left hand to the nose of MacDonald and the pain proved too much for the young Canadian to bear as he went crumbling down to the canvas shortly after forcing the epic battle to come to an end.

Below are the full results from UFC 189.

Conor McGregor def. Chad Mendes via TKO in Round 2 at 4:57
Robbie Lawler def. Rory MacDonald via TKO in Round 5 at 1:00
Jeremy Stephens def. Dennis Bermudez via TKO Round 3 at 0:32
Gunnar Nelson def. Brandon Thatch via submission in Round 1 at 2:54
Thomas Almeida def. Brad Pickett via knockout in Round 2 at 0:29