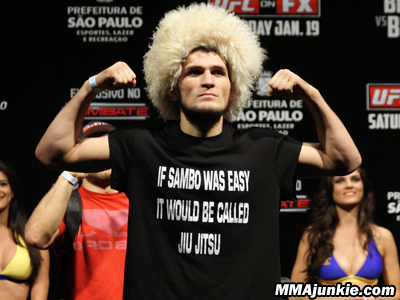 Khabib Nurmagomedov was clearing out the lightweight division in the UFC with 6 victories in 2 years. A stretch from January 2012 through April 2014. Those wins included one TKO, one submission, and four unanimous decision victories. In that span Khabib even got a win over the current champion Rafael Dos Anjos. There were rumors at the time for Khabib would finally get a top 5 ranked lightweight. The likes of Gilbert Melendez, Donald Cerone (Khabib is scheduled to fight him at UFC 187), Anthony Pettis and Benson Henderson. Every time it seemed like Khabib would finally get his crack at the top 5 something came up and those fights never happened. Whether it was bad timing or those guys just did not want to fight Khabib, we will never know. Personally I think it was the later. After defeating Rafael Dos Anjos, who is now the lightweight champion, Khabib sustained a knee injury that needed surgery and has been sidelined for the past 11 months.

Since Khabib’s absence we saw the rise of “Showtime” Anthony Pettis. Not only did Pettis capture the lightweight championship but became an instant superstar and was even featured on the Wheaties Box. Pettis has now lost the lightweight championship to Rafael Dos Anjos. I expected for Khabib to shift his focus onto Rafael Dos Anjos especially knowing he is so close to a title shot with a win over Donald Cerone. What I didn’t expect is the trash talk Khabib has been doing towards Anthony Pettis especially after UFC 185 where Pettis suffered a brutal loss to Dos Anjos. During and after the bout Khabib was not shy about his feelings towards Pettis and even Dos Anjos.